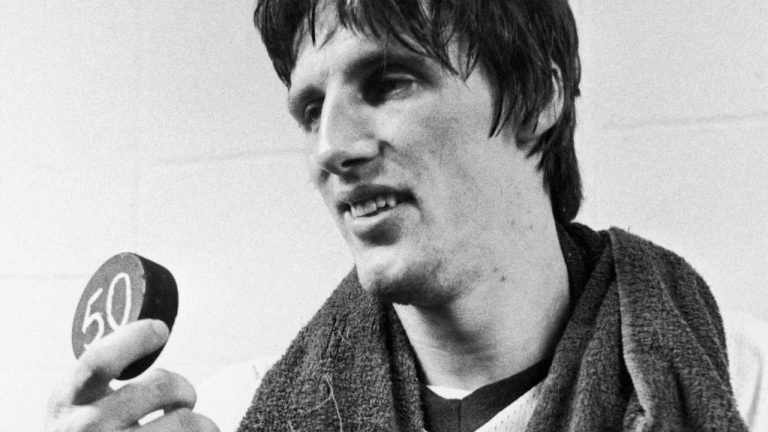 One of the greatest goal scorers in National Hockey League history had two big achievements on this date. He was far from the only Hockey Hall of Fame member to have a memorable night, and a trio of All-Star Games were played. Let’s take our daily trip back through time and relive the most significant moments from Jan. 23.

On Jan. 24, 1981, Mike Bossy of the New Islanders entered his game against the Quebec Nordiques with 48 goals in 49 games. He was trying to become just the second player in NHL history to score 50 goals in 50 games after Montreal Canadiens legend Maurice Richard accomplished this feat during the 1944-45 season.

The fans who packed the Nassau Coliseum hoping to see history were starting to feel disappointed as Bossy had yet to find the back of the net with less than five minutes to play. Then, at the 15:50 mark of the third period, he scored a power-play goal for his 49th of the season. Every time his skates touched ice from this point on, the crowd began to cheer. He beat goaltender Ron Grahame from the left circle, with just 1:29 left in regulation, for his historic 50th goal. His two tallies helped the Islanders to a 7-4 victory.

Exactly five years later, on Jan. 24, 1986, Bossy became the 20th player in NHL history to score 1,000 career points. He hit this major milestone with a goal and three assists in the Islanders’ 7-5 win at the Washington Capitals. Bossy’s Hall of Fame teammate, Bryan Trottier, scored his 15th career hat trick in the victory.

Howie Morenz scored the 271st and final goal of his career on Jan. 24, 1937, in the Canadiens’ 4-1 win at the Chicago Blackhawks. He suffered a severe leg injury four days later, in a rematch with the Blackhawks, that ended his career. He eventually died of complications from this injury on March 8, 1937. His 257 goals with the Canadiens are still the 11th-most in franchise history all these years later.

Glenn Hall tied Georges Vezina’s record for the most consecutive games played by a goaltender on Jan. 24, 1960, when he took the net for the 328th straight contest. He suffered a 3-2 loss on this night to Montreal, the team Vezina starred with. He played in 502 consecutive games before this streak ended, a record that will never be broken.

Bobby Orr extended his point streak to 18 games on Jan. 24, 1971, with a goal and two assists in the Boston Bruins’ 4-2 win over the visiting Canadiens. He scored nine goals and 35 points during this streak. The victory also pushed the Bruins’ winning streak at Boston Garden to 15 games in a row.

Two decades later, on Jan. 24, 1991, another Bruins legendary blueliner captured the spotlight. Ray Bourque picked up two assists to give him 888 career points, passing Orr for the most by any Boston defenseman. Cam Neely scored his 250th NHL goal, and Andy Moog earned his 11th career shutout as the Bruins beat the Hartford Whalers 3-0.

Mario Lemieux scored a goal in each period on Jan. 24, 2001, to lead the Pittsburgh Penguins to a 3-1 win over Montreal. His 40th career hat trick came on just three shots on goal and moved him ahead of Bossy for the second-most in league history. This was the final hat trick of his remarkable career; only Wayne Gretzky had more with 50.

That same night, defenseman Larry Murphy became just the second player in league history to appear in 1,600 games. He chipped in with an assist as the Detroit Red Wings topped the visiting Nashville Predators 4-3.

The New York Rangers retired Brian Leetch‘s No. 2 on Jan. 24, 2008, before their 2-1 shootout win over the Atlanta Thrashers. The Hall of Fame defenseman played in 1,129 games for the Blueshirts, second only to Harry Howell. He is the franchise’s all-time leader with 741 assists and is second in points with 981. Only Rod Gilbert scored more with his 1,021.

Jan. 24, 2003, was a memorable night across the NHL. Starting in Dallas, where Mike Modano became the Stars’ all-time leader in games played when he took the ice for the 993rd time. He broke the old record held by Neal Broten in a 4-2 win at the St. Louis Blues.

Also, Sergei Fedorov scored his 20th goal of the season for the 12th time in his NHL career and added two assists in a 5-2 Red Wings’ victory at the Vancouver Canucks.

Finally, goaltender Martin Biron beat the Toronto Maple Leafs 4-0 to earn his third straight shutout and set a Buffalo Sabres’ team record by not allowing a goal in 201:12 of play. Miroslav Satan factored in every goal by scoring a pair and assisting on the other two.

Buffalo played host to the 1978 NHL All-Star Game on this date. Hometown favorites played a big role as Rick Martin tied the game late in regulation, and Gilbert Perreault scored in overtime to give the Wales Conference a 3-2 win over the Campbell Conference. This was the first All-Star Game to go into overtime.

Team North America beat Team World 8-6 on Jan. 24, 1999, as Tampa Bay hosted the festivities. Arturs Irbe of the Carolina Hurricanes became the first goaltender to record an assist in All-Star Game history. Gretzky was named the game’s most valuable player by scoring a goal and adding two assists for the North American squad.

The All-Star Game came to Dallas for the first time on Jan. 24, 2007, and a sold-out crowd saw the home Western Conference beat the Eastern Conference 12-9. Stars goaltender Marty Turco picked up the victory. Daniel Briere picked up MVP honors with a goal and four assists in the losing effort.

Chris Oddleifson became the first player in Canucks’ franchise history to score two shorthanded goals in a game on Jan. 24, 1975, during a 5-5 tie with the Maple Leafs.

On the same night Bossy scored his 50th goal in his 50th game, Charlie Simmer of the Kings scored a hat trick to give him 49 goals in 50 games, as Los Angeles picked up a 6-4 road win in Boston.

Whalers’ defenseman Neil Sheehy became the first and still the only player in NHL history to wear No. 0 on Jan 24. 1988, in 2-1 overtime win over the Red Wings. He did not pick up any points, but he got onto the scoresheet with seven penalty minutes. Sheehy is now an NHL agent representing several players, including Ryan Suter, Nick Leddy, and Casey Mittlestadt.

Mike Vernon became the 24th goaltender in NHL history to record 250 career victories on Jan. 24, 1995, when the Red Wings beat the Canucks 6-3. Ray Sheppard led the attack with his sixth career hat trick and an assist, while defenseman Paul Coffey picked four helpers.

Kevin Dineen played his 500th career game with the Whalers on Jan. 24, 1996, in the team’s 4-2 loss in Buffalo. He joined Ron Francis as the only two players in franchise history to appear in 500 games.

While the best players in the league were at the All-Star Game on Jan. 24, 1999, the Canucks fired head coach Mike Keenan. Marc Crawford was named as his replacement and became the 15th head coach in team history.

Ryan Smyth became the eighth player in Edmonton Oilers’ history to score 400 points on Jan. 24, 2004, when he picked up an assist in a 4-3 loss to the visiting Predators.

Speaking of the Predators, a decade later, on Jan. 24, 2017, Eric Nystrom had a huge game against the Calgary Flames. With just one goal in his previous 19 games, he scored four times against his former team. However, the Flames staged a late comeback to win 5-4 in a shootout.

William Nylander scored on a penalty shot just six seconds into overtime on Jan. 24, 2018, to give the Maple Leafs a 3-2 win at the Blackhawks. He tied Mats Sundin, David Legwand, Alex Ovechkin, and Andreas Athanasiou for the fastest goal in regular-season overtime.

On Jan. 24, 2022, Kirill Kaprizov became the fastest player in Minnesota Wild history to reach 100 points (44 goals, 56 assists in 92 games). He reached the milestone with assists on Matt Boldy and Mats Zuccarello’s goals in an 8-2 win over the Canadiens.

Happy Birthday to You

Matthew Zator is the assistant managing editor at THW and a writer who lives and breathes Vancouver Canucks hockey, the NHL Draft, and prospects in general. He loves talking about young players and their potential. Matthew is a must-read for Canucks fans and fans of the NHL Draft and its prospects. For interview requests or content information, you can follow Matthew through his social media accounts which are listed under his photo at the conclusion of articles like this one about Tyler Motte.

Danny Green may make his Grizzlies debut on Wednesday